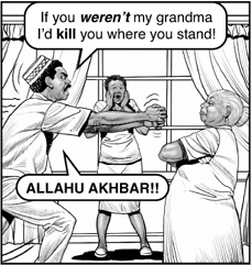 A Virginia church has generated a lot of controversy over its distribution of a pamphlet that some claim wrongly stereotypes Muslims.

Bible Baptist Church of Roanoke made local news when some in the city’s Muslim community expressed concern over the distribution of a pamphlet on Islam. Titled “Unforgiven?” the pamphlet was created by Chick Publications, a fundamentalist Christian evangelism outlet.

In an interview with local media, Roanoke resident Hussain Al-Shiblawi said the messages in the pamphlet suggest that Muslims are violent and are condemned to hell. “It basically indicated that the people are violent, the religion itself is violent, and the facts in here are not true,” said Al-Shiblawi to WBDJ 7 news.

“It shows him trying to kill his grandmother, saying, ‘If you weren’t my grandma, I’d kill you where you stand, Allahu Akbar’ … Read it before you hand it out, read it. Even though you don’t write it, you still hand it out.”

Al-Shiblawi also said that Bible Baptist Church regularly distributes Christian material to the community on Sundays, which he finds inspirational, but he’s deeply offended by the “Unforgiven?” pamphlet.

“Unforgiven?” is designed as a comic story, featuring a black man who converts to Islam while in prison after being threatened with physical violence. The man proceeds to fully embrace an extreme form of Islam, while his Christian grandmother attempts to prove his beliefs wrong by showing him that Christianity, and belief in Jesus Christ, is the only way.

The grandmother fails, however, and the final images in the comic strip show the man being condemned to hell. The final page has a message about the need to accept Jesus Christ and the Bible.

“Unforgiven?” is one of several pamphlets Chick Publications has released that deals with the topic of Islam. Others include “Allah Had No Son,” which argues that the Islamic god and Christian God are not the same; “Men of Peace?” which argues that the founder of Islam, Muhammad, did not go to Heaven; and “Your Best Life,” which Chick has labeled as being the “most popular Chick tract.”

Chick Publications has weathered controversy over the content of their tracts on various topics, including how it portrays other Christian sects, like Roman Catholicism.

The Southern Poverty Law Center has listed Chick Publications as a “hate group” over Chick’s “militant, vitriolic propaganda war against anyone who doesn’t adhere to its particular brand of Christianity.” “Atheists aren’t Chick Publications’ only target. The California-based ministry, founded almost 50 years ago by Jack Chick – who still writes and illustrates much of its material – is also anti-Muslim, anti-gay, and anti-Mormon,” wrote Leah Nelson of SPLC back in 2011.

According to WBDJ 7, Bible Baptist Church’s pastor has stated that he is willing to meet with Al-Shiblawi regarding his concerns.