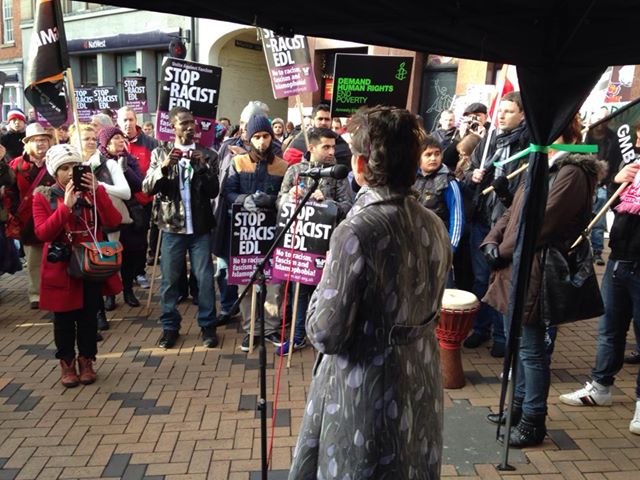 Hundreds of people gathered in Wakefield today to oppose a protest by the far-right English Defence League.

Community group We are Wakefield staged a multi-cultural celebration as a counter-protest to an EDL demonstration in the city centre this afternoon.

Around 100 EDL members gathered on Brook Street amid a heavy police presence for around an hour from 2pm.

Organisers of the We are Wakefield event said more than 300 people attended their demonstration, which was held from 12 noon until around 3.30pm, with speakers including Council leader Peter Box, Wakefield MP Mary Creagh and Bishop of Pontefract Tony Robinson.

It was staged in response to the EDL protest by a coalition of trade unions, faith groups and other organisations. Ms Creagh said: “I think it’s really important we stand together on behalf of the majority of people in Wakefield. We have had a passionate protest here today.”

Police said 11 males were arrested for minor public order offences this afternoon but the arrests were not made within the two protests.

The declared aim of the EDL protest was “to warn the Yorkshire people about the threatening Islamification of our country which has raised its ugly head in that area. Race attacks on whites are been brushed under the carpet, most never get past the point of a report to the police who silence it and allow it to carry on”.

The specific issue that led to a demonstration being held in Wakefield was the treatment of local EDL “Angel” Gail Speight, whose claim back in April that her house was under attack by armed Muslims was, astonishingly, not taken seriously by the police. A violent clash outside Speight’s house the following month led to charges against two men she accused of attacking her, but the jury refused to accept Speight’s account of events and they were acquitted.

Judging by the turnout at the Wakefield protest, Speight’s credibility is low even among EDL supporters.