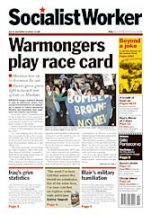 Britain is facing a sustained attempt to whip up full-blooded racism. Each day government ministers are clamouring to appear on camera denouncing Muslims and demanding their neighbours and teachers spy on them.

Across the country communities are living in fear. From bitter experience they know that racist speeches by politicians quickly translate into murderous racist violence on the streets. Listen to what befell Hina’naz Ahmed, a student at Wolverhampton University, last week:

“As I was walking past a bus stop I was surrounded by about five youths, one of them a girl. They stood and waited for me then followed me down the street shouting abuse, telling me to take off my veil.

“They then repeatedly said that Straw has made it illegal so I had to take it off. They shouted ‘Jack Straw’ repeatedly. I think Straw has made racists think it’s OK to abuse people like me.”