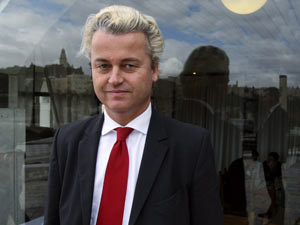 Dutch Parliamentarian Geert screened his controversial film Fitna in Jerusalem on Sunday, calling on Europe to restrict immigration “from backward Islamic countries” and describing Islam as a totalitarian ideology “full of hate, violence and submission.”

“Europe is in the process of ‘Islamization.’ We need to fight it,” Wilders said. “We have to win the war against Islam. If we don’t … we will lose our cultural identity, our rule of law, our liberties and our freedom.”

Wilders made the comments at a conference in Jerusalem organized by MK Arye Eldad, who founded the new Hatikva Party, entitled “Facing Jihad.”

Wilders also argued that “not all cultures are equal” and that “our Christian-Judeo culture is far better than the Islamic culture.”

Israel, he said, was not fighting a territorial war, but an ideological one, in which Islam “aims for dominance over non-Muslims.” He said there was no such thing “as moderate Islam.”

Eldad, whose new party opposes the formation of a Palestinian state, told conference attendees that if Islam is practiced as it is practiced today, “the chance that we will see real peace with [the Palestinians] is very slim.”