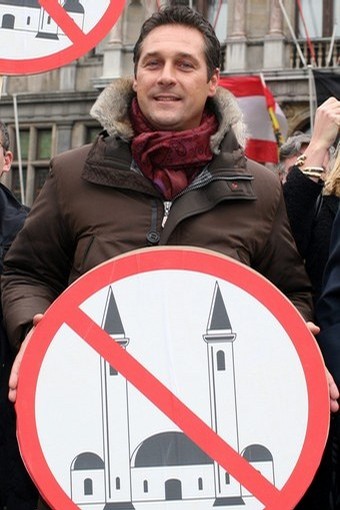 Yes, really. That’s what Heinz-Christian Strache states in an interview with RT. His objection, apparently, is only to “radical Islamist trends”. Can’t see this going down too well with the international “counterjihad” movement. Hasn’t Strache grasped that Islam is a “religion of war”?

In fact, Strache goes on to say he’s in favour of a ban on minarets and the niqab, along with the wearing of headscarves by state employees. He also claims that European nations will “disappear politically and demographically” unless they recognise the urgent need for “the preservation of European folk culture”. No prizes for guessing where Strache might think the political and demographic threat comes from.

Strache also says: “I respect Turkey. Turkey is a fantastic country, a proud country, with a fantastic culture, with fantastic economic success which inspires respect.” But that doesn’t prevent him claiming: “More than 50% of Turkish immigrants don’t want to integrate into Austrian society. They don’t want to learn the language and organize parallel and opposing structures.” He is against Turkey becoming a member of the EU because that would mean “an end to the European idea of peace and social ideals”. Oh, and Turkey’s prime minister Recep Tayyip Erdoğan is apparently bent on world domination.

In other words, the Strache interview is just another example of the double-talk that characterises the “counterjihad” movement. They try to deflect criticism of their real ideas and policies by wrapping their anti-Muslim bigotry in lies and hypocrisy.