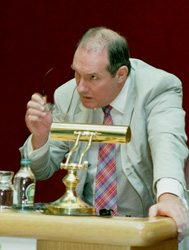 “Being a Muslim, especially a Muslim woman, in Britain is for many a dispiriting and occasionally terrifying experience. The society that prides itself on tolerance has lost its bearings over Islam. On the streets, the prejudice that Islam is irrationally and murderously violent and menacingly foreign has spawned a subculture of hatred and abuse. If you are a woman in a hijab, being jeered at, even spat at, is routine. Many never venture from their houses.

“This is fertile ground for widespread racism and where the law is currently uncertain. Harassment and abuse are certainly illegal, but the threshold that incurs legal action is very high; equally illegal is the expression of hatred, or views that might incite hatred, towards a group or individual for their race.

“But the woman in a hijab could be African, Asian or Middle Eastern. It is not her race that makes her the object of hatred; it is her religious belief and culture that require her to dress in such a conspicuously different way and make her part of the hated group. The law, as currently framed, offers her no systematic protection, and no explicit penalty for a political party, say the BNP, that chooses to make such hatred a central plank of its electoral pitch.”

Which you might think would lead Hutton to support a ban on inciting religious hatred. Not so. He asserts that the proposed new law has “crossed another line that is no less dangerous in a liberal society. To incite or express hatred for someone because of the colour of their skin is plainly unacceptable, but to put the expression of views about religion in the same off-limits territory, even if only in tightly drawn circumstances where they incite hatred, is wrong. By protecting belief systems from criticism, it challenges the very heart of why and what we are.”

Quite who this “we” might be is left unclear. It seems to imply white non-Muslims, as distinct from “them”, the non-white Muslims, who in their large majority support a ban, and thus seek to undermine the foundations of “our” liberal society.

Hutton proceeds to give us a potted history of why economic development in the West outstripped that of Muslim countries:

“Any explanation about the way European civilisation overtook the Islamic world … has to incorporate the capacity of Europe to accept the intellectual and practical consequences of the catalytic impact of ideas. Continuing technological innovation drove growth; but behind technological innovation lay the Enlightenment’s willingness, which did not exist elsewhere, to subject every belief and tradition to sceptical inquiry and to accept the practical consequences. This is part of any conceptualisation of modernity; it is at the core of who we are and it is profoundly secular and sometimes abusive about the way religion may hold back human advances.”

Again, there is the undefined “we”, who are proud of “our” secularism and do not hesitate to subject religion to abuse. This narrows the field down even further, as it obviously excludes most members of every existing faith group. “We” apparently consist of non-religious, or even anti-religious, secularist liberals – people just like Will Hutton in fact.

It is of course possible to debate the reasons why the West industrialised in advance of the rest of the world. However, having achieved technological superiority, the “enlightened” European powers then proceeded to invade and occupy Muslim countries. Generally speaking, foreign conquest doesn’t provide entirely favourable conditions for the economic development of its victims – still less for the occupied to compete successfully with the occupier. That Hutton can explain the failure of the Muslim world to emulate the West’s economic advances without the barest reference to colonialism and imperialism speaks volumes about the mind-set of white liberals.

Hutton goes on to say that he is “intensely critical of the way the Islamic religious belief system condemns the civilisation to pre-modernity, together with an embedded sexism. I find the hijab offensive; it is a symbol of female oppression and relegation of women to second-class status that offends universal principles of human rights. It is a matter of concern to me as a British citizen that this degree of inequality exists in my country; it is of wider concern that Islam predisposes its adherents to poverty, backwardness and sexism because it incubates deep resentment and, at its extremes, terrorism. I can write this today. When the bill becomes law, I and many others will be exceptionally wary of expressing any such view….”

It is difficult to see why. Hutton’s take on Islam could be described in various ways – ignorant, condescending, paternalistic, sexist, Eurocentric and borderline racist are a few of the terms that come to mind. But tending to incite religious hatred? I don’t think so.

Hutton recommends support for the “compromise” proposed by the Liberal Democrat MP, Evan Harris. Given that Harris toured around radio studios not so long ago declaring his enthusiastic support for the French hijab ban, Muslims could be forgiven for being a tiny bit sceptical that Harris has their best interests at heart. Indeed, the minor tinkering with the Public Order Act that Harris proposes would hardly mark an improvement on the present situation.

To give Hutton his due, unlike his loathsome fellow Observer hack Nick Cohen, he does try to soften his arguments with no doubt sincere expressions of concern for those who are on the receiving end of anti-Muslim racism. However, the practical result is that on the issue of an anti-incitement law he lines up alongside Islamophobes like Cohen … and others further to the right.

Happily, public opinion would appear to be against him, at least in the capital. A poll commissioned by the Mayor shows that only 15 per cent of Londoners oppose new legislation to outlaw incitement of hatred against people on grounds of their religion, while fully 72 per cent support it. One can only assume that they lack “our” commitment to Enlightenment values.