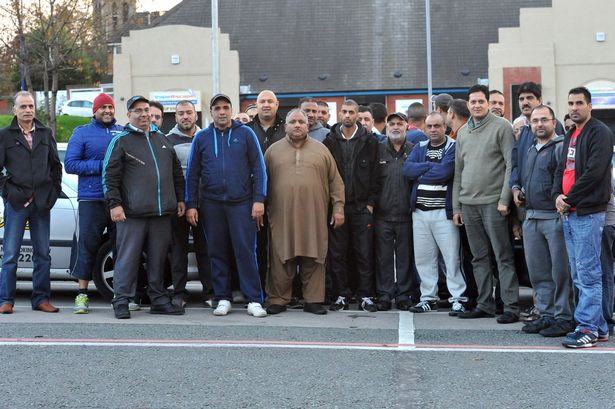 A group of Asian cabbies have staged a protest after their boss revealed he supplies white drivers to customers on request.

Dozens of furious drivers who work for Heywood firm Car 2000 gathered in the town centre tonight in response to the admission by owner Stephen Campbell.

In 2011, Mr Campbell’s family took over the business, which as formerly called Eagle Taxis, which employed two of the nine men jailed a year later for grooming girls. Earlier this week, Mr Campbell told the M.E.N. his staff would provide customers with white drivers on request.

The Asian cabbies protesting tonight blasted the policy as ‘racist’ and ‘discriminatory’ – and called on Mr Campbell to apologise.

One Car 2000 driver, Abdul Hafiz, said: “It is wrong. We all pay £95 rent a week to him and if he is deliberately not sending Asian drivers, then we are losing out on work. They should be saying to customers that we all work here and you can’t pick and choose like that, and if you’re not happy with that, don’t use us.

“There were some bad men who worked as taxi drivers in Heywood and now they are in prison. We have done nothing wrong but now we are being treated like paedophiles. You can’t tar us with the same brush.”

Barkat Hussain, another of the firm’s cabbies, added: “We have to take a stand. Not every Muslim person is the same. I can see many drivers leaving over this.”

Suleman Ahmed, from the Rochdale Taxi Association, added: “We are losing out on jobs because people don’t trust us to take their daughters anywhere. That is heartbreaking. We are simply family men, trying to provide for our own kids.”

The drivers described how their cars had regularly been attacked or vandalised following Rochdale’s grooming scandal.

Mohammad Ajaib, also from the association, said Car 2000’s policy was exacerbating racial tensions in Heywood because it was not giving Asian drivers the opportunity to challenge the negative stereotyping.

He added: “That’s what we don’t like about this. It makes the situation worse. It’s divisive. Heywood has become a scary place to work.”

Mr Campbell has not responded to our requests for a comment.