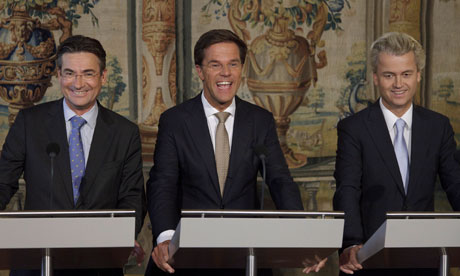 The Netherlands will ban the burqa, anti-Islam MP Geert Wilders said Thursday following the announcement of a pact to form a minority coalition government backed by his party.

“There will also be a burqa ban,” Wilders told journalists in The Hague, announcing measures agreed on by three parties negotiating to form a new government.

The measures, which seek to cut government spending by 18 billion euros by 2015, should also halve the number of immigrants who enter the Netherlands, the politician said.

“A new wind will blow in the Netherlands,” Wilders said, standing alongside presumed prime minister in waiting Mark Rutte, who leads the pro-business VVD party, and Christian Democratic Appeal (CDA) leader Maxime Verhagen – the two parties set to be in government.

According to Radio Netherlands: “There will be a complete ban on burkas, and police and justice employees will not be allowed to wear headscarves.” And: “Conditional passports for new immigrants to be withdrawn if they commit crimes in the first five years.”

The report adds that Wilders has got a wider agreement on “stricter immigration and integration measures. Some measures, including the conditional passport for new citizens, may violate existing EU regulations. The governing agreement explicitly states it will try to find as much leeway as possible within existing treaties governing immigration and integration, and if need be, renegotiate the treaties. At the same time, the new cabinet will lobby to change EU guidelines. The agreement calls for a significant decline in immigration.”