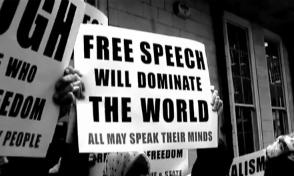 Well, not the Muslim Council of Britain, who have issued a well-reasoned statement, “Ban groups if they break the law, not on the basis of media hysteria“. But support for the government’s stupid move comes from the Quilliam Foundation, the British Muslim Forum and the Muslim Women’s Network – all of whom are in receipt of state funding.

Backing for the ban also comes from Shaaz Mahboob of British Muslims for Secular Democracy. Remind me, weren’t BMSD the organisation that protested against Islam4UK last October brandishing placards reading “Free speech will dominate the world: All may speak their minds”? All except those who BMSD decides are not entitled to free speech, it would appear. The BMSD demonstrators urged us to “laugh at those who insult freedom”. However, their response to the ridiculous Anjem Choudary isn’t to draw attention to his comic potential but to support a state ban on his group.