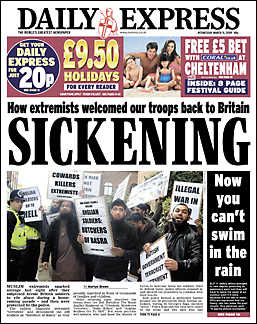 “The latest publicity stunt organised by some former members of the banned al-Muhajiroun outfit in Luton yesterday appears to have gone exactly to plan.

“It is a simple formula – hold up some offensive placards designed to get people’s backs up and call a local reporter to come along and capture some footage – that has reliably generated acres of media coverage for them in recent years.

“Our TV channels and today’s newspapers have very obligingly given over a huge amount of precious broadcast time and expensive newsprint to report the antics of the tiny group of hooligans.

“Leaflets had been distributed during the past week by the former al-Muhajiroun activists in Luton urging people to protest at the parade of soldiers returning from Iraq. There are over 20,000 Muslims living in Luton and tellingly less than 20 people heeded their call. And yet the irresponsible actions of this tiny few seem to command the airwaves.”