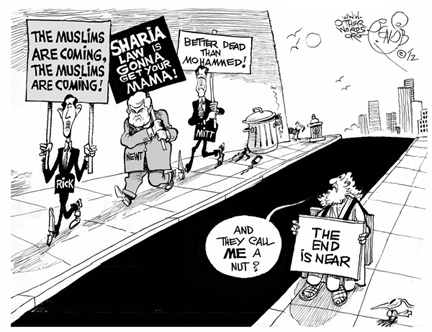 It seems that the Republican presidential aspirants’ fervor to confront Islam has receded a bit with the decline and fall of Rick Perry and Newt Gingrich, but one can likely still count on Rick Santorum to come up with some bon mots on the threat posed by Shariah law. Those who fear that hands will soon be lopped off shoplifters caught in Cleveland appear to be making much ado about nothing, but there is a much broader and more insidious agenda that is really playing out behind the scenes. Perry, Gingrich, and Santorum are all smart enough to know that Islamic law is hardly poised to dominate the U.S. legal system, but they are using it as the wedge issue to deny the patriotism of Muslims in general and fuel the demands to exercise a military option against Iran.

Philip Giraldi on why the US Right promotes fear and hatred of Muslims.