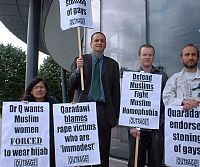 “The simple fact is that policymakers in the West – and progressive liberals more generally – are not always going to agree with the opinions of Qaradawi et al. Even very open-minded followers of orthodox scripturalism in Islam will often tend toward social conservatism, meaning that there will continue to be tensions regarding homosexuality and the role of women. It will also be difficult to find complete agreement with the West on more immediate political and security issues. While Qaradawi has strongly and consistently condemned bin Laden and Al-Qaida terrorism, his pronouncements on the insurgency in Iraq and the use of violence by Palestinians have certainly been at odds with Washington.

“That said, however, perhaps the worst thing the West could do is to cast figures such as Qaradawi as part of the problem simply because his views don’t precisely correspond with US goals…. a vote for Qaradawi is a vote against Zarqawi. While increased recruitment into the Qaradawi camp will not by any means produce a generation of Muslims favorably predisposed to US foreign policy, it will represent a consolidated, critical mass of influential and respected Muslims with whom meaningful dialogue with the hope of tangible progress can take place.”