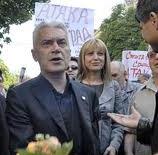 The incident in front of the downtown Sofia mosque is a victory of democracy, Kapka Siderova, wife of the leader of the Bulgarian far-right, nationalist Ataka party, Volen Siderov, says.

On May 20, Ataka supporters, led by Siderov, shocked Bulgaria as its rally protesting against the use of loudspeakers by the mosque in downtown Sofia got out of hand, and activists of Ataka assaulted praying Muslims in front of the mosque.

In a Sunday interview for the TV channel bTV, Siderova said the “so-called clash was a way to earn the right to not be exposed to the wail of the Imam”. She insisted the boundaries of tolerance have not been overstepped because there was no fighting, just some pushing, adding things like this happen everywhere and all the time, giving as an example the visit of US President, George W. Bush, in Brussels when demonstrators threw eggs at him.