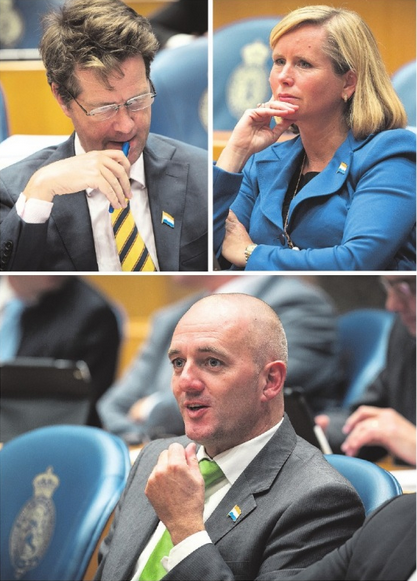 The Prinsen flag, which has an orange section rather than red as in the current Dutch flag, was adopted by the Dutch national socialist party NSB in the 1930s. It has since become a symbol of right-wing extremism and is used by groups such as the Nederlandse Volksunie and Stormfront.

MPs Martin Bosma, Reinette Klever, Machiel de Graaf and Harm Beertema wore the badge during the debate, the NRC said. The PVV declined to respond to question on why they had worn the flag.

During the first day of the debate on the Dutch budget, Wilders was asked by D66 leader Alexander Pechtold to distance himself from the far right, after several people at a party rally on Saturday were seen with the Prinsen flag and making Nazi salutes. The party leader refused to do so and instead described Pechtold as a miserable little man.

Wilders went on to say he was proud of Saturday’s demonstration and of everyone who attended. “It goes without saying that the PVV and its thousands of supporters have nothing to do with extremism and anti-semitism. The PVV has nothing do to with that sort of idiocy,” the PVV leader said.

The Dutch Israeli information centre CIDI has also asked the PVV to distance itself from right-wing fringe groups, after several member were spotted at the demonstration, website ThePost.nl said. The PVV is thought to receive considerable funding from pro-Israel groups in the US.

In 2011, the Prinsen flag was spotted in the offices of two PVV MPs in the parliamentary complex but removed soon afterward.

It will be interesting to see what Wilders’ US supporters like Daniel Pipes, David Horowitz and Pamela Geller have to say about this. Not a lot, I would imagine.