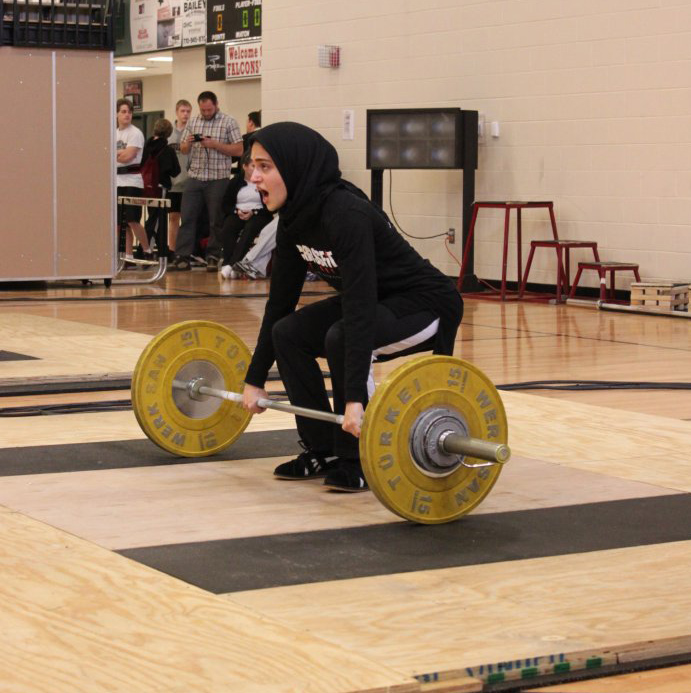 A 35-year-old weightlifter is battling to be able to compete in the sport she loves while wearing a hijab instead of the body-hugging uniform that’s required.

Kulsoom Abdullah, who was born in the United States to Pakistani parents, discovered weightlifting at her gym, Crossfit, in Atlanta in 2008. She entered her first open competition last year, and was thrilled to find out that she was actually pretty good in the competitive sport. She can lift 70 kilos (about 154 pounds) to her shoulders, and 60 kilos (or about 132 pounds) over her head, in a move called the “clean-and-jerk.” Last December, she qualified for the American Open Weightlifting Championships, which would have been her first national competition.

But when her coaches asked whether she would be able to wear her modified uniform – which covers everything but her face, hands, and feet – the organizers told told them no.

Abdullah talked to some lawyer friends, who told her that other athletes had won their bids to wear different clothing for religious reasons. So she tried again, this time personally writing to USA Weightlifting with her request, and asking the group if it could compromise on a uniform.

Officials with the group wrote back and said they had to follow the rules of the International Weightlifting Federation (IWF), which mandates collarless uniforms and doesn’t allow exceptions.

“I was really disappointed because I was really looking forward to it,” she told The Lookout. “I had never thought I would qualify at the national level.”

“It is like saying, if you are different, you can not compete,” she wrote on her web site. “I am not asking people to change, I am just asking to participate and be able to dress the way I do.”

Now, the Council on American-Islamic Relations (CAIR), a Muslim advocacy group, is taking up Abdullah’s cause, and trying to lobby weightlifting organizations to revise their rules in time for her to compete in a July national competition. CAIR officials are arguing that USA Weightlifting is in violation of the Ted Stevens Olympic and Amateur Sports Act, which forbids sports bodies from discriminating based on “race, color, religion, sex, age, or national origin.” Not allowing Abdullah to wear her hijab is discrimination, CAIR maintains.