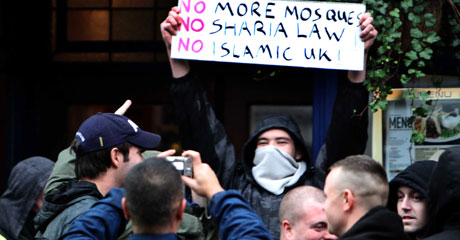 A man was abusive and threatening to two British Muslims outside Wrexham’s new mosque and threatened to burn it down. David Jared Evans, 36, sent texts to people suggesting a visit to the mosque in the former Miner’s Institute and a demonstration and said flame throwers made “good legal weapons”.

Evans received a suspended sentence after he admitted using threatening, abusive and insulting language and behaviour towards Abdulla Anwar which was racially and religiously aggravated. He had a similar previous conviction in 2006 after he abused a black woman.

The judge said Mr Anwar and a colleague had approached Evans outside the mosque and offered him help. “For that, they were subjected to a torrent of disgraceful abuse,” the judge said. The comments were religiously and racially aggravated, persistent and escalated to threats of violence.

A prison sentence was inevitable but the judge took into account Evans had already served the equivalent of a six month sentence on remand. He had pleaded guilty and rather than sending him back into custody for what could only be a matter of weeks he believed it would be better to tackle his “intransigent attitudes”.

Evans, of High Street, Rhos, received a 36 week prison sentence, suspended for a year. He must carry out 200 hours unpaid work and attend an offending behaviour programme run by the probation service specifically to address his racially motivated behaviour.

Evans was also made subject of a two month 7pm-7am curfew at weekends and Judge Parry told him to pay £500 towards prosecution costs and £150 compensation to Mr Anwar. A restraining order was made which bans him from going to the mosque or approaching Mr Anwar.

The report refers to text messages found on Evans’s mobile phone in which he asked one contact if he was “up for a visit to the mosque tonight” and suggested the use of a flame thrower. An earlier report indicated that the text messages were sent to English Defence League supporters.

A year ago the EDL held a protest in Wrexham at the site of the proposed new mosque in the name of its sister organisation the Welsh Defence League, though most of the participants were reportedly of English origin.