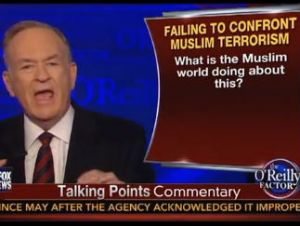 Talk show hosts at Fox News have been whipping US viewers up into a state of indignation over Muslims’ supposed failure to condemn the terrorist attack in Kenya.

Bill O’Reilly demanded: “What is the Muslim world doing about it? Nothing!” And Bob Beckel expanded on this theme:

“They are not the religion of peace…. You moderate Muslims out there … the time has come for you to stand up and say something! And I will repeat what I said before: No Muslim students coming here with visas, no more mosques being built here until you stand up and denounce what’s happened in the name of your prophet…. The time has come for Muslims in this country, and for other people around the world, to stand up … and if you can’t, you’re cowards!”